Random walk vectors for clustering (part I – similarity between objects)

This post opens a series of short posts that discuss how to use many random walk vectors (vectors describing probability distributions of random surfer on a graph – like pagerank) to find homogeneous groups of objects in a dataset. The main idea here is to combine the existing work of many researchers into one method. The mathematics behind these ideas might be complex, but we will try to be as ELI5-oriented as possible – so anyone can read, understand (at least basic bits) and implement it himself/herself. As the whole thing here relies on components that exist on different abstractions levels we will start from basic atomic terms that will later be enclosed in a building blocks for the final solution.

We will start from explaining notion of similarity between objects. It is essential for many machine learning problems.

If two objects do not differ at any of the dimensions euclidean distance is zero, otherwise it is a positive number. Distances between all objects in a dataset are usually expressed in a form of a matrix called distance matrix.

Julia package named Distances is worth mentioning now. Lets install it and start looking into distance matrix based on iris dataset (we assume each column of a data matrix is a single observations and each row represents single feature)

Just a quick marginal note on its speed. It is impressively fast. Try to compute distance matrix for 10000 objects, each having 10000 features.

(checkout the benchmarks for details) Lets try to interpret what we see. First of all indices \(i\) and \(j\) are indices of objects/observations, then upper left blue square visible on a distance matrix heatmap represents group of objects similar to each other (and not similar to other objects). Of course this is exceptional as our objects are sorted with respect to class memebership so basic cluster structure is visible. If we now shuffle the objects resulting plot will lose such expressiveness 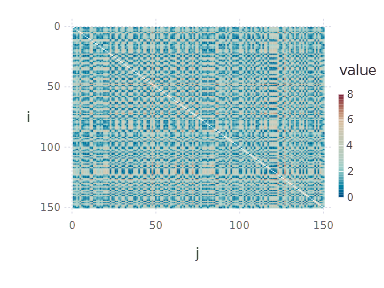 where \(d\) is distance between considered objects. Lets see how it looks depending on choice of \( \sigma \). 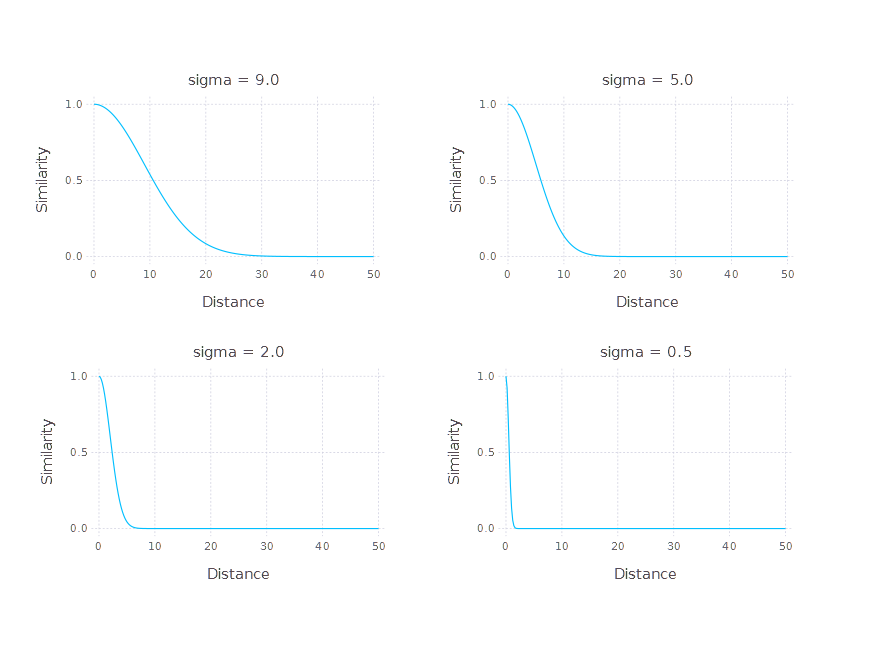 \( \sigma \) parameter can be seen as a soft threshold parameter on a distance value. In fact it is parameter controlling width of the gaussian function on positive part of \( \mathcal{R} \) domain. Anyway, transforming distance into similarity introduces problem of \( \sigma\) choice. Lets take a look at distance matrices of iris tranformed by gaussian similarity function element-wise (using different \( \sigma \) parameter) and corresponding histograms of similarities across whole dataset.

Running the code above for different values of sigma results in the following outputs: 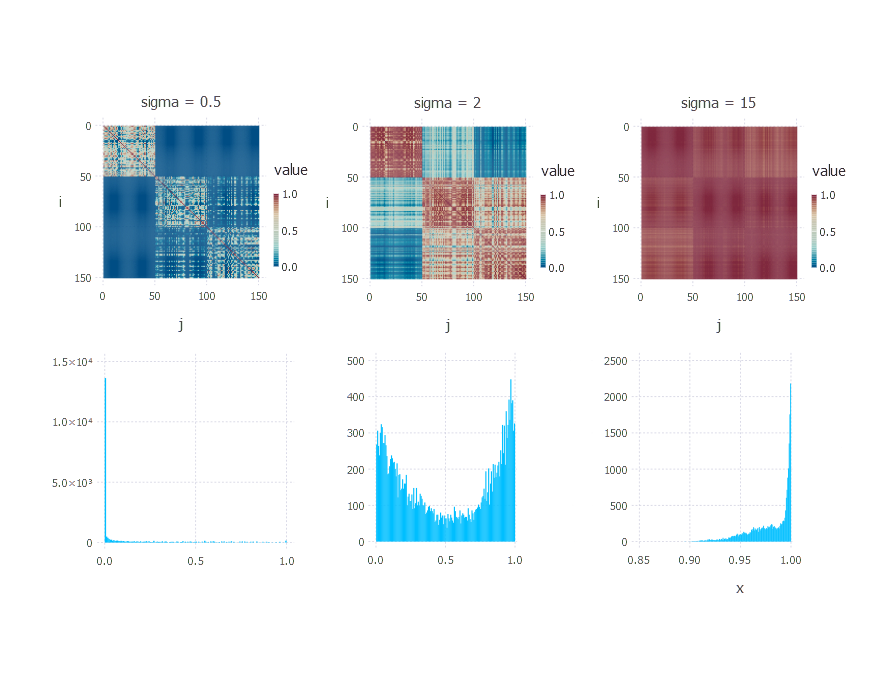 We presented one approach of how to represent and encode similarities between objects in your dataset. The problem of sigma choice was pointed out as crucial as it shapes the similarity matrix. We will keep it in mind and be careful when choosing sigma in the future.