Reinforcement learning has been on the radar of many, recently. It has proven its practical applications in a broad range of fields: from robotics through Go, chess, video games, chemical synthesis, down to online marketing. While being very popular, Reinforcement Learning seems to require much more time and dedication before one actually gets any goosebumps. Playing around with neural networks with pytorch for an hour for the first time will give an instant satisfaction and further motivation. Similar experience with RL is rather unlikely. If you are new to the field you are almost guaranteed to have a headache instead of fun while trying to break in.

One attempt to help people breaking into Reinforcement Learning is OpenAI SpinningUp project – project with aim to help taking first steps in the field. There is a bunch of online resources available too: a set of lectures from Deep RL Bootcamp and excellent Sutton & Barto book.

What is this series about

This blog posts series aims to present the very basic bits of Reinforcement Learning: markov decision process model and its corresponding Bellman equations, all in one simple visual form.

To get there, we will start slowly by introduction of optimization technique proposed by Richard Bellman called dynamic programming. Then we will take a look at the principle of optimality: a concept describing certain property of the optimization problem solution that implies dynamic programming being applicable via solving corresponding Bellman equations. All will be guided by an example problem of maze traversal.

The term ‘dynamic programming’ was coined by Richard Ernest Bellman who in very early 50s started his research about multistage decision processes at RAND Corporation, at that time fully funded by US government. Bellman’s RAND research being financed by tax money required solid justification. Funding seemingly impractical mathematical research would be hard to push through. Richard Bellman, in the spirit of applied sciences, had to come up with a catchy umbrella term for his research. He decided to go with dynamic programming because these two keywords combined – as Richard Bellman himself said – was something not even a congressman could object to

DP is all about multistage decision processes with terminology floating around terms such as policy, optimal policy or expected reward making it very similar to Reinforcement Learning which in fact is sometimes called approximate dynamic programming.

At the time he started his work at RAND, working with computers was not really everyday routine for a scientist – it was still very new and challenging. Applied mathematician had to slowly start moving away from classical pen and paper approach to more robust and practical computing. Bellman’s dynamic programming was a successful attempt of such a paradigm shift. His concern was not only analytical solution existence but also practical solution computation. Therefore he had to look at the optimization problems from a slightly different angle, he had to consider their structure with the goal of how to compute correct solutions efficiently.

In RAND Corporation Richard Bellman was facing various kinds of multistage decision problems. In a report titled Applied Dynamic Programming he described and proposed solutions to lots of them including:

One of his main conclusions was that multistage decision problems often share common structure. That led him to propose the principle of optimality – a concept expressed with equations that were later called after his name: Bellman equations.

To understand what the principle of optimality means and so how corresponding equations emerge let’s consider an example problem. Imagine an agent enters the maze and its goal is to collect resources on its way out. The objective in question is the amount of resources agent can collect while escaping the maze. 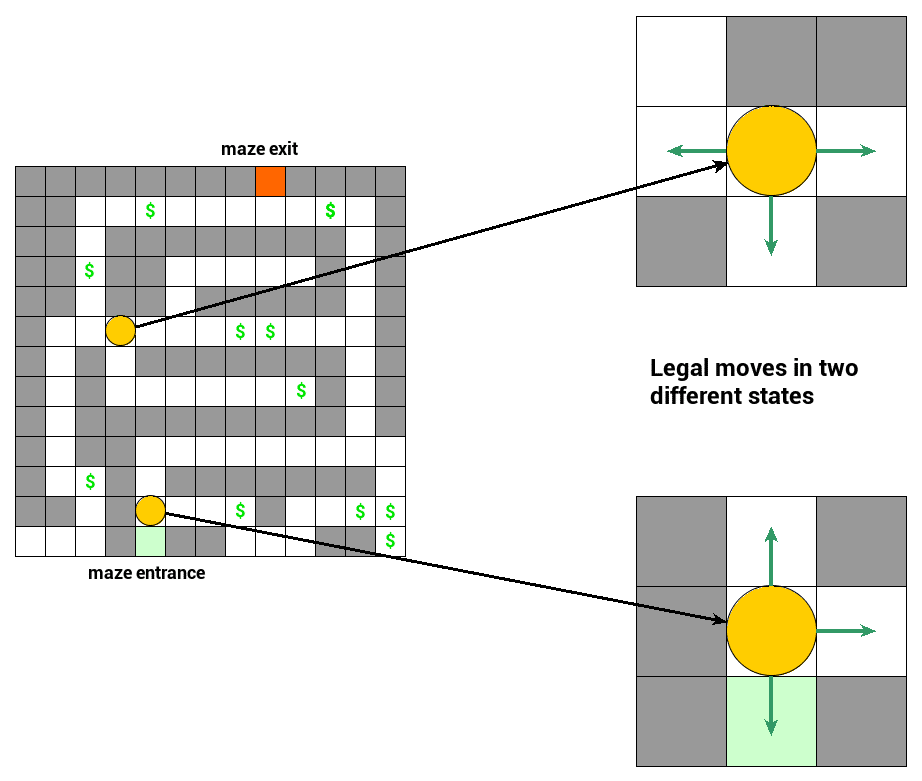 This loose formulation yields multistage decision optimization problem where every possible sequence of 100 moves is a solution candidate. Such a solution candidate is also what is often called a policy (or a plan). Every policy can be evaluated – simply by traversing through the maze with respect to the policy details. In our case evaluation is expressed as the amount of resources agent collects on his way out. Our job then is to find an optimal policy evaluation or – in other words – find out what is the maximum amount of resources agent can collect after \(N\) moves.

Let’s describe all the entities we need and write down relationship between them down.

First of all, we are going to traverse through the maze transiting between states via actions (decisions) . When action is performed in a state, our agent will change its state. Let’s write it down as a function \(f\) such that \( f(s,a) = s’ \), meaning that performing action \(a\) in state \(s\) will cause agent to move to state \(s’\).

In every state we will be given an instant reward. Its value will depend on the state itself, all rewarded differently. We can then express it as a real function \( r(s) \).

We also need a notion of a policy: predefined plan of how to move through the maze . Let’s denote policy by \(\pi\) and think of it a function consuming a state and returning an action: \( \pi(s) = a \). Policies that are fully deterministic are also called plans (which is the case for our example problem). 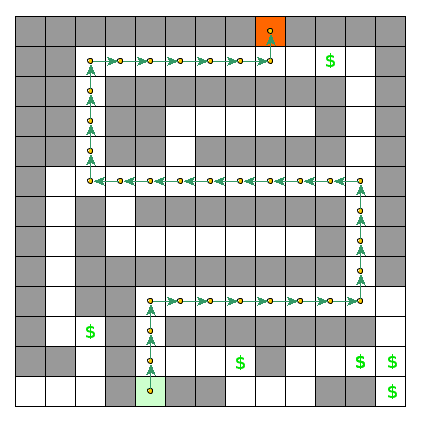 Once we have a policy we can evaluate it by applying all actions implied while maintaining the amount of collected/burnt resources.

Another important bit is that among all possible policies there must be one (or more) that results in highest evaluation, this one will be called an optimal policy. Optimal policy is also a central concept of the principle of optimality.

The principle of optimality 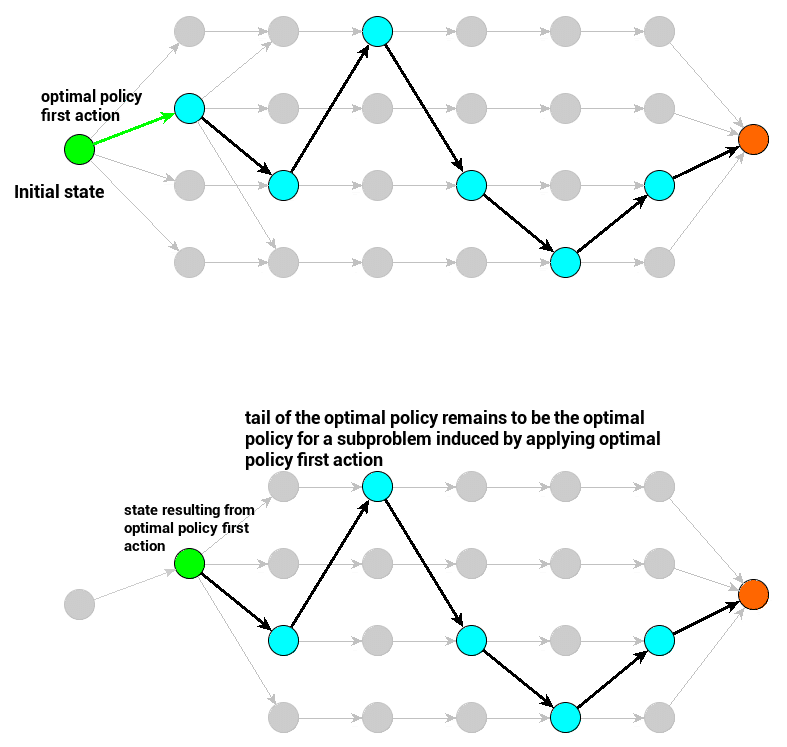 Black arrows represent sequence of optimal policy actions – the one that is evaluated with the greatest value.

For a policy to be optimal means it yields optimal (best) evaluation \(v^N_*(s_0) \). Therefore we can formulate optimal policy evaluation as:

which is already a clue for a brute force solution. Just iterate through all of the policies and pick the one with the best evaluation. But we want it a bit more clever. Assuming \(s’\) to be a state induced by first action of policy \(\pi\), the principle of optimality lets us re-formulate it as:

This equation implicitly expressing the principle of optimality is also called Bellman equation.

Bellman equation does not have exactly the same form for every problem. The way it is formulated above is specific for our maze problem. What is common for all Bellman Equations though is that they all reflect the principle of optimality one way or another.

There are some practical aspects of Bellman equations we need to point out:

This post presented very basic bits about dynamic programming (being background for reinforcement learning which nomen omen is also called approximate dynamic programming). In the next post we will try to present a model called Markov Decision Process which is mathematical tool helpful to express multistage decision problems that involve uncertainty. This will give us a background necessary to understand RL algorithms.